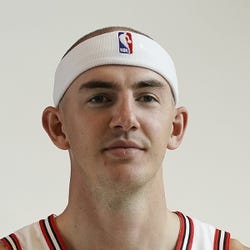 2022 Stats
PTS
5.8
REB
2.9
AST
3.6
STL
1.4
BLK
0.8
ROS Projections
PTS
REB
AST
STL
BLK
Unlock Our Projections
2022 Fantasy Outlook
The Bulls made plenty of splashes prior to last season, including bringing in DeMar DeRozan and Lonzo Ball. To improve their depth, they also signed Caruso away from the Lakers. After never having averaged more than 21 minutes per game with the Lakers, he logged 28 per night with the Bulls. He provided 7.4 points, 3.6 rebounds, 4.0 assists, 1.7 steals and 1.0 three-pointers per game. His ability to defend multiple positions and play aggressive defense made him a vital team member, but he was only able to play in 41 games because of injuries. He's never played in more than 64 games during a season in his career, and his all-out style of play on the defensive end could lead to more injuries down the road. That said, the Bulls need him to have a significant role again this season, especially with Ball still battling a knee injury that forced him to have surgery. The team did sign Goran Dragic, but Caruso will be locked into plenty of minutes either way. For those in search of assists and steals past the middle rounds of the draft, Caruso is someone to pursue. Read Past Outlooks
read more
Height 6'5"
Weight 186
DOB 2/28/1994
College Texas A&M
Debut 2017
$Signed a four-year, $36.98 million contract with the Bulls in August of 2021.
Personal Bio/PreCareer Summary

Alex Caruso was born in College Station, Texas, to Mike and Jackie Caruso. His dad Mike played basketball for Creighton. He has two sisters, both of whom attended Texas A&M. Caruso grew up around the Texas A&M program, spending many seasons as a ball boy for the Aggies. He attended A&M Consolidated High School in College Station, where he played basketball under head coaches Rusty Segler and Rick German. In his senior year, Caruso averaged 18 points and nine rebounds and led his team to the postseason. He was named TABC All-Regional, All-State, as well as TABC All-Star and district MVP. Caruso then attended Texas A&M University, where he majored in sports management. He notes ping pong is a favorite off-the-court activity. Caruso's favorite non-NBA sports team is the soccer team Manchester City F.C. Learn more about Caruso by following him on Twitter @ACFresh21 and on Instagram @acfresh21. Caruso began his four-year career with Texas A&M as a reserve. By the end of his freshman season, the 6-foot-5 guard moved into the starting lineup and did not come off the bench for the majority of his stay in college. He averaged 5.5 points, 3.4 assists, 3.2 rebounds and 1.8 steals as a freshman. Caruso started 33 games as a sophomore and averaged 9.0 points, 5.0 assists, 3.6 boards and 2.0 steals. He scored a career-high 28 points with eight rebounds and seven assists in the SEC Tournament loss to Missouri. The guard continued to pace the Aggies as a junior and put up 9.1 points, 5.5 assists, 4.5 rebounds and 2.1 steals. He had four double-digit assist games. Caruso led the team to the Big Dance in his senior season. He helped the team get to the Sweet 16 by scoring a season-high 25 points against Northern Iowa. Caruso closed his career with the second-most assists and the third-most steals in SEC history. After going undrafted in the 2016 NBA draft, Caruso joined the Philadelphia 76ers for the 2016 NBA Summer League.

GChicago Bulls
See All NBA Rumors
Past Fantasy Outlooks
2021
2020
2018
The 2020-21 campaign was more or less the same results we have seen from Caruso in a Lakers uniform, in what would be his last season with the team. The uber-athletic guard averaged 6.4 points, 2.9 rebounds, and 2.8 assist in 21.0 minutes per game. The big positives of Caruso's season were highlighted by his improvement from the three-point line and on the defensive side of the ball. The Texas A&M product shot an inconsistent 33.3 percent from deep in the 2019-20 season, but shot an impressive 40.1 percent from beyond-the-arc last season. Caruso's defensive game shined, as he averaged 1.1 steals per game, which extended his streak to three seasons of averaging more than one takeaway per game. He also garnered five Second Team All-Defense votes despite his limited playing time. The 27-year-old's situation has now changed after signing a four-year, $37 million dollar contract with the Bulls this summer. He will be starting the season backing up Lonzo Ball and Zach LaVine alongside fellow reserve Coby White. While Chicago will not need to rely on the scoring of the 6-foot-4 guard, the team's lack of both depth at the guard position and defensive playmakers should lead to a legitimate role for Caruso this season. It is hard to imagine a major breakout fantasy season for Caruso. But we could see Caruso set a few per-game career-highs based on an elevated role with the Bulls.
After a productive second season that saw Caruso take noticeable steps forward in most categories while logging over 21 minutes per contest, the guard looked poised to take another leap in his third season. That didn't materialize, however, as Caruso watched his minutes fall from 21.2 to 18.4 in 2019-20. The dip in minutes coincided with a fairly substantial decline across most statistical categories and shooting percentages. It was a disappointing campaign for Caruso, who was expected to see an increased role with Rajon Rondo on the shelf for much of the season. Instead, point guard duties were dominated by LeBron James, while Kentavious Caldwell-Pope and Danny Green primarily manned duties at the two-guard position. Caruso's chances of seeing an expanded role in 2020-21 are much slimmer following the Lakers' signings of Dennis Schroder and Wesley Matthews. Caruso can be left undrafted outside deeper fantasy leagues this season.
Caruso is an explosive guard from Texas A&M University who has made a name for himself in the G League, averaging 19.0 points, 3.8 rebounds, and 7.7 assists per game with the South Bay Lakers in 2017-18. He played well enough to earn some time at the NBA level with the Lakers, starting seven games out of the 37 he was on the roster while chipping in with 3.7 points per game. Caruso's game high was 15 points against the Clippers. Caruso will not receive many minutes this season with the addition of Rajon Rondo to go along with the two young guards already in place, Josh Hart and Lonzo Ball. However, Caruso is still young at 25 and can still gain a bench spot at some point but will have to prove himself once again in the G League.
More Fantasy News