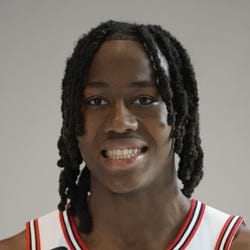 2022 Stats
PTS
10.7
REB
3.4
AST
2.9
STL
0.7
BLK
0.5
ROS Projections
PTS
REB
AST
STL
BLK
Unlock Our Projections
2022 Fantasy Outlook
Dosunmu - the No. 38 overall pick in the 2021 NBA Draft - compiled a better-than-expected rookie campaign. Benefitting the rookie was that Chicago dealt with a myriad of backcourt injuries, including Zach LaVine playing 67 games, Lonzo Ball playing 35 and Alex Caruso playing 41. Those absences allowed Dosunmu to step into an expanded role more often than anticipated. He started 40 of his 77 appearances and averaged 8.8 points, 3.3 assists, 2.8 rebounds and 1.2 combined steals-plus-blocks in 27.4 minutes. Dosunmu's efficiency also impressed. The rookie slashed 52/38/68, resulting in a 59.6 percent true-shooting percentage. He didn't create a ton of those opportunities on his own - 69 percent of his shots were assisted - but that's to be expected given the number of relatively high-usage players on the Bulls like Ball, LaVine, DeMar DeRozan and Nikola Vucevic. Free throw attempts were one of the primary points of concern for Dosunmu who shot just 1.3 freebies per 36 minutes. That wasn't for a lack of effort, however, as he took 41 percent of his shots at the rim - good for the 93rd percentile among players labeled as combo guards. Overall, he ranked 211th in per-game fantasy production. In theory, Dosunmu should improve on that rank, but his path to playing time is complicated when the Bulls are healthy. That said, Dosunmu has earned his way into the starting five to open the season, taking over as the team's starting point guard to open the season with Lonzo Ball set to miss a few months due to a knee injury. Dosunmu's expected fantasy value should jump as a result, though he's still a late-round flier, given that Caruso, Goran Dragic and Coby White are bound to see minutes as well. Read Past Outlooks
read more
Height 6'4"
Weight 200
DOB 1/17/2000
College Illinois
Drafted 2nd Rd, #8 in 2021
$Signed a two-year, $2.49 million contract with the Bulls in August of 2021.
Personal Bio/PreCareer Summary

Dosunmu was born Jan. 17, 2000 in Chicago, Illinois to Nigerian immigrants. In April of 2018, he was one of 26 high school seniors to participate in the Jordan Brand Classic at Barclays Center in Brooklyn, New York. During his senior high school season, he averaged 25.2 points, 7.4 rebounds, 7.3 assists and 2.7 steals and led Morgan Park to a second straight IHSA Class 3A Championship. He was a consensus first-team All-State Selection and was a five-star recruit heading into college by Rivals and 247Sports. He also played in the 2018 U18 Americas Championship, where the United States took home the gold medal. Dosunmu played three collegiate seasons for Illinois. He started all 90 of his appearances. As a senior, he won the Bob Cousy (best point guard) Award behind averages of 20.1 points, 6.3 rebounds, 5.3 assists and 1.1 steals. He shot 48.8 percent from the field, 38.6 percent from three and 78.3 percent from the free-throw line. His collegiate career highs were 36 points, 12 rebounds, 12 assists, four steals and two blocks.

GChicago Bulls
See All NBA Rumors
2021 Fantasy Outlook
Dosunmu was selected by the Bulls with the 38th overall pick in the 2021 NBA Draft. The 6-foot-5, 200-pound guard was an electric scorer for the Illini throughout his two seasons. Dosunmu averaged 20.1 points while also adding 6.3 rebounds and 5.3 assists per game last year with Illinois. However, he doesn't project as an every-game player for the Bulls since the team is relatively deep at guard.
More Fantasy News