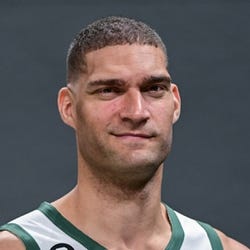 2022 Stats
PTS
15.5
REB
5.8
AST
1.1
STL
0.7
BLK
2.9
ROS Projections
PTS
REB
AST
STL
BLK
Unlock Our Projections
2022 Fantasy Outlook
Lopez missed nearly all last season due to a back injury requiring surgery. He suffered the injury during the first game of the season and didn't see the court again until mid-March. Once back, Lopez was his usual self, though his workload was understandably reduced to avoid further damage. In 22.9 minutes per game, the center averaged 12.4 points on 47/36/87 shooting, 4.1 rebounds and 1.2 blocks. He also stayed healthy throughout the playoffs, though he struggled from three (21.4 percent) and was often a non-factor offensively. The 2022-23 campaign marks Lopez's age 34 season and final year under contract with Milwaukee. He'll presumably slide back into a role where he consistently records minutes in the mid-to-high 20s. Much of Lopez's fantasy value depends on his shot-blocking ability. He averaged only 1.5 blocks in 2020-21, which brought his ranking down to 107th per game compared to 2019-20, where he ranked 77th behind 2.4 blocks per tilt. In 2018-19, he ranked 55th with 2.2 blocks per game, but he also knocked down a career-high 2.3 triples per game. Ultimately, Lopez is a serviceable option toward the end of most standard drafts as a relatively reliable source of blocks and threes from the center position. Read Past Outlooks
read more
Height 7'0"
Weight 282
DOB 4/1/1988
College Stanford
Drafted 1st Rd, #10 in 2008
$Signed a four-year, $52 million contract with the Bucks in July of 2019.
Personal Bio/PreCareer Summary

Brook Lopez was born in 1988 in North Hollywood, California. The son of Deborah Ledford and Heriberto Lopez, Brook comes from a basketball family. Older brothers Chris and Alex both played at the prep level before Alex moved on to college basketball at Washington and Santa Clara. Twin brother Robin currently plies his trade with Brook in Milwaukee. Brook and Robin both spent two years at Stanford - their mother's alma mater - before declaring for the 2013 Draft. In 2018, Lopez traveled to Malawi with the Clinton Foundation as a part of the NBA Cares initiative, looking into healthcare and economic opportunities for families and communities in Africa. Lopez represented the United States at the 2019 FIBA World Cup in China, appearing in seven games and averaging 2.6 points and 1.9 rebounds per game. Lopez joined brother Robin as part of coach Trent Johnson's recruiting class for Stanford in 2006. The 7-foot center started 18 games for the Cardinal and produced 12.6 points, 6.0 rebounds and 1.7 blocks. He was named to the Pac-10 All-Freshman team. In the team's first round loss to Louisville in the NCAA Tournament, Lopez provided 18 points and seven rebounds. Johnson gave the center a featured offensive role in his sophomore season, and he went on to average 19.3 points, 8.2 rebounds and 2.1 blocks. He made the first team of the All-Pac-10 squad and was named to the All-Pac-10 Tournament team. After a quiet game in the first round win over Cornell in the Big Dance, Lopez exploded for 30 points - including a buzzer-beater - in the second round win over Marquette. He followed that game with 26 points in the Sweet 16 loss to Texas. After the sophomore year, the Cardinal center declared for the 2008 Draft.