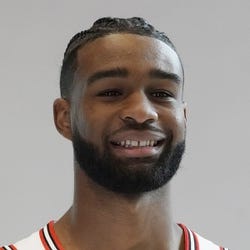 2022 Stats
PTS
8.1
REB
1.8
AST
1.7
STL
0.7
BLK
0.2
ROS Projections
PTS
REB
AST
STL
BLK
Unlock Our Projections
2022 Fantasy Outlook
After a promising second season in the NBA, where he ranked 121st in per-game fantasy value, White's role shrunk last year. The Bulls revamped the roster, bringing in Lonzo Ball, DeMar DeRozan, and Alex Caruso, which clogged up backcourt usage and minutes. Chicago dealt with enough injuries - mainly to Caruso and Ball - to open up 27.5 minutes per game for White, but he averaged a modest 12.7 points, 3.0 rebounds and 2.9 assists. On two positive notes, he reached a career-high 56.4 percent true shooting mark on splits of 43/39/86, and he reduced his turnovers to a career-low 1.5 per 36 minutes. But the situation remains essentially the same, if not more difficult, for White this season after the Bulls brought in veteran Goran Dragic. Ball's health issues aren't resolving as hoped, which could open extra minutes for White, but it won't be enough for him to be an impact player in standard fantasy leagues. Nevertheless, the guard is still worth considering in dynasty/keeper leagues and may be a buy-low candidate for managers hoping he gets traded to a better situation. He's shown enough potential to be worth a flier in those formats. Read Past Outlooks
read more
Height 6'4"
Weight 195
DOB 2/16/2000
College North Carolina
Drafted 1st Rd, #7 in 2019
$Signed a two-year, $10.88 million contract with the Bulls in July of 2019. Bulls exercised $5.84 million team option for 2021-22 in December of 2020. Bulls exercised $7.41 million team option for 2022-23 in September of 2021.
Personal Bio/PreCareer Summary

Alec Jacoby (Coby) White was born in Goldsboro, North Carolina in 2000 to Donald and Bonita White. During the 1970s, Donald played four years of college basketball at North Carolina Central. White's older brother Will also participated in the early 2010s at Mars Hill University. At the Greenfield School, Coby established a career state high-school record by scoring 3,573 points. He went on to earn the honors of North Carolina's Mr. Basketball and USA Today's North Carolina Player of the Year after his senior season in 2018. White also led the Team USA in scoring that summer at the FIBA Under-18 Americas Championship, en route to winning the Gold Medal. You can follow him on Twitter (@whitecoby2) and Instagram (@cobywhite). The 2018-19 North Carolina Tar Heels had established scorers in forward Luke Maye and wing Cameron Johnson. While the bigger players were consistent sources of points, it was White that really made the team go. After scoring 16 points or fewer in his first five games, White took off for 33 points in a November loss to Texas. He hit seven three-pointers in the loss in what was his first of three games where he topped the 30-point plateau. The 6-foot-1 blur would lead the Tar Heels past Miami in February with 33 points and had a career-high 34 points in a win over Syracuse later that month. On the season, White averaged 16.1 points, 4.1 assists and 3.5 rebounds. He hit 35.3 percent of his three-pointers and a North Carolina freshman-record 82 treys. The Tar Heels advanced to the Sweet 16 where they lost to Auburn. White averaged 14.0 points and 3.3 assists in the NCAA Tournament. He was named to the All-ACC Second Team. He declared for the 2019 NBA Draft after just one season under coach Roy Williams.

GChicago Bulls
See All NBA Rumors
Past Fantasy Outlooks
2021
2020
2019
White parlayed a strong end to his rookie campaign into a near-full-time starting role with the Bulls last season. He saw 31.2 minutes per game and averaged 15.1 points, 4.8 assists and 4.1 rebounds. White had some big games as well, with three 30-point games and three performances with at least 10 assists. The end result was White ranking 121st in fantasy on a per-game basis -- not bad, but also not quite up to the expectations some had for him. White may have a difficult time building on that in 2021-22. During the offseason, the Bulls brought in Lonzo Ball and Alex Caruso, not to mention DeMar DeRozan. Plus, Zach LaVine is still around and will take up plenty of usage. There's now a wealth of guard depth in Chicago, and it's not clear where White fits in. He should be an everyday player, but it's highly unlikely he starts, and it seems like the best he could hope for is sixth-man minutes. At 21 years old, White is still a strong dynasty/keeper option, but his value in redraft leagues this season is relatively low. He's probably best suited for deep leagues in which backup guards can still hold a roster spot.
White's first season in the league saw him show flashes of offensive excellence, as he posted a career high of 35 points in late February and was regularly recording 20-point outings prior to the suspension of play in March. The now 20-year-old guard was eventually inserted into the starting lineup, and he will likely remain there to start 2020-21 under new coach Billy Donovan. Though he finished the season strong and made the All-Rookie Second Team, it wasn't all positive for White during his rookie campaign. As a point guard, he averaged just 2.7 assists per game and shot a horrific 39.4 percent from the field. He showed no hesitation in firing threes with 5.8 attempts per game on an average 35.4 percent shooting. White didn't get to the line much either at just 2.0 attempts per game, further hampering his efficiency levels. The 20-year-old has plenty of time to grow into a more well-rounded player, but he'll need to grow if he's going to last as a starting NBA point guard. With talented offensive players like Zach LaVine and Lauri Markkanen surrounding him, White's value will rise if he gets his teammates involved a bit more than he did as a rookie.
The Bulls' front office has been surprisingly vocal in their dismissal of Kris Dunn as the team's future at point guard, so White will attempt to make more of an impact as a prospect. The UNC product was named to the 2018-19 All-ACC team, and he averaged 18.1 points, 4.2 assists, 3.7 rebounds and 1.1 steals per contest in conference play. White's biggest strengths are his quickness and overall scoring ability. He showed off both at summer league, averaging 15.0 points in five games, though his 33.7 percent mark from the field and 3-of-30 clip from beyond the arc left a lot to be desired. It seems like Tomas Satoransky will be Chicago's opening night starter at point guard, but White should be firmly in line for minutes as the first point guard off the bench. It's possible his role expands if he can make an impact early on, but fantasy owners shouldn't expect big minutes out of White as a rookie.
More Fantasy News