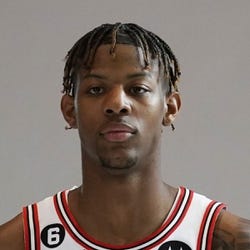 2022 Stats
PTS
1.0
REB
0.2
AST
0.5
STL
0.1
BLK
0.2
ROS Projections
PTS
REB
AST
STL
BLK
Unlock Our Projections
2022 Fantasy Outlook
A two-year wing out of Arizona, Terry was selected by the Bulls with the No. 18 pick in the 2022 Draft. As a sophomore, he made the Pac-12 All-Defensive Team and the All-Pac-12 Honorable Mention Team behind averages of 8.0 points on 50/36/74 shooting, 4.8 rebounds, 3.9 assists and 1.2 steals in 27.7 minutes. With Chicago heavy on offense-first options - Zach LaVine, DeMar DeRozan and Nikola Vucevic - continuing to add great defenders in free agency and the draft makes sense. However, Terry is a relatively unproven shooter, making his future tough to project. Terry may walk into some reserve minutes at forward behind DeRozan and Patrick Williams, but he will be competing against Javonte Green and Derrick Jones, not to mention Alex Caruso and Ayo Dosunmu in the backcourt. Read Past Outlooks
read more
Height 6'7"
Weight 195
DOB 7/12/2002
College Arizona
Drafted 1st Rd, #18 in 2022
$Signed a two-year, $6.54 million contract with the Bulls in July of 2022. Contract includes $3.51 million team option for 2024-25.
Personal Bio/PreCareer Summary

Terry was born on July 12, 2002, in Phoenix, Arizona. He attended Corona del Sol High School in Tempe, Arizona before transferring to Hillcrest Prep in Phoenix, where he'd play alongside future Phoenix Suns big man Deandre Ayton. In two years at Hillcrest, Terry averaged 15.8 points, 7.4 rebounds, 10.3 assists, 3.7 steals, and 1.9 blocks per game. He played his AAU ball with the Compton Magic, playing alongside other Pac-12 players such as Isaiah Mobley, Evan Mobley and Onyeka Okongwu. Terry was a consensus four-star recruit in the 2020 class and the No. 46 overall player, according to 247Sports. On July 23, 2019, he committed to playing college basketball for Arizona, being the first commit in the 2020 class for Arizona. As a freshman, Terry appeared in all 26 games for the Wildcats, starting 14 of them while averaging 4.6 points, 3.2 rebounds and 1.5 assists per game. Since Arizona was placed on a self-imposed post-season ban, Terry would not get the opportunity to showcase his skills in the 2021 Pac-12 Tournament or the 2021 NCAA Tournament. He gained a bigger role during his sophomore season, where he started all 37 games, averaging 8.0 points, 4.8 rebounds, 3.9 assists and 1.2 steals per game. He finished second in the Pac-12 in assist-to-turnover ratio (2.84), sixth in assists per game (3.92), eighth in FG% (50.2), and ninth in steals per game (1.24). He became one of the marquee defensive players in the conference, earning him All-Defensive First Team. Terry helped Arizona to a 33-4 record, winning the 2021 Roman Main Event, Pac-12 Conference Regular Season and 2022 Pac-12 Tournament Titles. Arizona returned to the 2022 NCAA Tournament for the first time since 2018. When the lights were the brightest, Terry delivered, scoring a career-high 17 points in his final game as a Wildcat against Houston. Eventually, he would be selected by the Chicago Bulls with the 18th pick in the 2022 NBA draft.