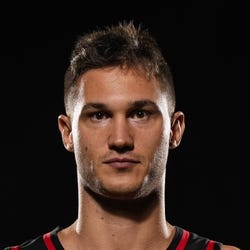 Out
Injury Knee
Est. Return 4/15/2023
2022 Stats
PTS
0.0
REB
0.0
AST
0.0
STL
0.0
BLK
0.0
ROS Projections
PTS
REB
AST
STL
BLK
Unlock Our Projections
2022 Fantasy Outlook
This summer, Gallinari signed a two-year agreement with the Celtics. Boston will be his sixth NBA team over his 14-year career. However, he suffered a torn ACL in FIBA play over the summer and will presumably be out for most, if not all, of the upcoming season. It's possible he returns towards the back half of the year or even the playoffs, but that's not actionable information on draft day. Read Past Outlooks
read more
Height 6'10"
Weight 236
DOB 8/8/1988
College Italy
Drafted 1st Rd, #6 in 2008
$Signed a one-year, $6.48 million contract with the Celtics in July of 2022. Contract includes $6.8 million player option for 2023-24.
Personal Bio/PreCareer Summary

In 1988, Danilo Gallinari was born in Sant'Angel Lodigiano, Italy. Nicknamed "The Rooster" (Il Gallo, in Italian), Gallinari began his basketball quest in 2004 playing for Casalpusterlengo, a team in Serie B1, the third level in Italy. He spent four professional seasons playing in Italy before being drafted by the Knicks. The Rooster's father, Vittorio, played professional basketball in Italy for many teams. Vittorio was a Milan teammate and roommate of NBA player and coach Mike D'Antoni for eight seasons. Danilo participated in the NBA's Basketball Without Borders goodwill tour in Senegal in 2010. His favorite foods are sushi and gnocchi.You can follow the forward on Twitter (@gallinari8888) and Instagram (@danilogallogallinari). Gallinari played professional ball in Italy for four years before joining the NBA. In 2004, Gallinari started his professional career with Casalpusterlengo, a team in Serie B1 (the third level in Italy). The following year, Gallinari was acquired by Armani Jeans Milano, which assigned him to Edimes Pavia, a team competing in the Italian league second-division championship. An injury forced Gallinari to miss half the season, but he was nevertheless nominated as the best Italian player of the second division. In 2006, "The Rooster" was recalled by Olimpia Milano to play in the Italian league first-division championship. Despite this being his first season in the Italian first division, Gallinari was named the league's best player under the age of 22. He played a second season for Milano, averaging 17.5 points per game in the first division. He continued the year playing for Milano in the EuroLeague and quickly made a strong impression, leading to his selection as the 2007-08 EuroLeague Rising Star award winner. Soon after, Gallinari was selected by the Knicks with the No. 6 overall pick in the 2008 NBA Draft.