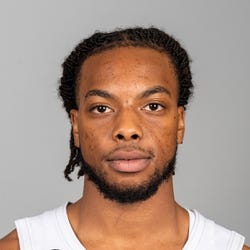 2022 Stats
PTS
22.2
REB
2.2
AST
7.7
STL
1.2
BLK
0.2
ROS Projections
PTS
REB
AST
STL
BLK
Unlock Our Projections
2022 Fantasy Outlook
Last season was a breakout campaign for Garland, who made his first All-Star team. He set career bests across the board, averaging 21.7 points, 3.3 rebounds, 8.6 assists, 1.3 steals and 2.6 three-pointers per game. What is just as impressive is that he shot 46.2 percent from the field and 89.2 percent from the free-throw line, making him a force in fantasy when combined with his averages. That said, he was aided by injuries to Collin Sexton and, to a lesser extent, Ricky Rubio that forced Garland into an even larger role out of the backcourt. Sexton is out of the picture this season, but he's been replaced by Donovan Mitchell, who the Cavs traded for while sending out Sexton, Lauri Markkanen, Ochai Agbaji and picks. However, Garland will remain the driving force of the offense and has clear room to grow, given that he's just 22 years old. After ranking 23rd in eight-category per-game fantasy production last year, managers will likely still need to pay into the late second round to get him this year, even with Mitchell entering the fold. Read Past Outlooks
read more
Height 6'1"
Weight 192
DOB 1/26/2000
College Vanderbilt
Drafted 1st Rd, #5 in 2019
$Signed a five-year, $194.3 million contract extension with the Cavaliers in July of 2022.
Personal Bio/PreCareer Summary

Darius Kinnard Garland was born in 2000 in Gary, Indiana to Winston and Felicia Garland. His father played seven years in the NBA with five different teams during the 80s and 90s. Garland attended the Brentwood Academy in Tennessee, where he won four state championships. He went from averaging 18.6 points as a sophomore to 23.4 as a junior to 27.6 as a senior, taking home the honor of Tennessee Mr. Basketball in each of those years. In 2018, Garland was also named Gatorade Tennessee Player of the Year as well as being a McDonald's All-American, Jordan Brand Classic All-Star, and Nike Hoop Summit invitee. You can follow him on Twitter (@dariusgarland22) and Instagram (@darius_garland). If you blinked, you might have missed Garland's collegiate career. He played just five games for Vanderbilt after being one of the most decorated recruits in Commodore history. The 6-foot-2 guard injured his meniscus and did not play after Nov. 23. The three-time Mr. Basketball in Tennessee had showed off some of his scoring acumen in the early going. He debuted with 24 points in a win over Winthrop. He had his best scoring effort in the game before he was injured. Garland scored 33 points on 12-for-18 shooting from the field, including five three-pointers. It was the second most by a freshman in Vanderbilt history. Garland injured his knee in the first minutes of the loss to Kent State. By January, the guard announced that he had left the team and was preparing for the 2019 NBA Draft. He was chosen by the Cleveland Cavaliers with the fifth overall pick.

GCleveland Cavaliers
See All NBA Rumors
Past Fantasy Outlooks
2021
2020
2019
Last season, Garland improved in almost every statistical category during his sophomore season. Perhaps the most impressive bump occurred with his shooting. Garland's field goal percentage went from 40.1 percent during his rookie season to 45.1 percent last season, and his three-point accuracy improved from 35.5 to 39.5 percent. As you would expect, that helped lift his scoring from 12.3 to 17.4 points per game. He also dished 6.1 assists per contest -- good for 18th in the NBA. The 6-foot-1 guard now enters his age 22-season as a potential breakout player. Last year, he ranked third on the team (behind Collin Sexton and the now-departed Andre Drummond) in field goal attempts per game at 14.9. While Sexton will likely operate as the lead scorer, Garland may be the more well-rounded of the two when it comes to fantasy production. The Cavs re-tooled the roster around their young backcourt, adding Lauri Markkanen in a sign-and-trade and drafting USC big man Evan Mobley with the No. 3 overall pick. With Jarrett Allen back on a five-year, $100 million contract, and Kevin Love still in the picture, Cleveland suddenly has plenty of mouths to feed, but Garland's development should remain a priority. If Garland can continue to improve as a defender (1.2 SPG last season) and raise his free-throw rate, he could be among this season's best fantasy values in the middle rounds.
After a top-five selection in the NBA Draft, expectations were high for Garland in his first season with Cleveland, though he didn't take on a robust role on offense, despite the deficiencies of the Cavaliers. He averaged 12.9 points, 3.9 assists, 1.9 boards and 1.8 triples in his inaugural campaign. Garland racked up six games with at least 20 points, though he ceded plenty of backcourt usage to second-year man Collin Sexton, who capped Garland's upside. Garland shot just 40.1 percent from the field, but his 87.5 percent shooting from the foul line and 35.5 percent shooting from deep were quality numbers for the Vanderbilt product. As the team is currently constructed, Garland will be sharing the backcourt with Sexton once again, and if Kevin Love and Kevin Porter can stay healthy all season, Garland's offensive production could be limited. He should do enough to retain some late-round value regardless.
Garland entered his freshman year at Vanderbilt as a five-star prospect but played just five games on the season due to a knee injury. He's reportedly back to 100 percent following knee surgery and will look to showcase in the NBA the talent he didn't have the chance to show much in college. In the five games he did play, he averaged 16.2 points, 3.8 rebounds and 2.6 assists while shooting 53.7 percent from the field and 47.8 percent from three on 23 attempts. Though just 6-foot-2 and 175 pounds, Garland is expected to share the backcourt with last year's first-round pick, Collin Sexton, who is 6-foot-2 and 190 pounds himself. While the Cavaliers will be at a severe disadvantage on the defensive end, it's possible the offensive capabilities of the guards will outweigh that -- think Damian Lillard and CJ McCollum. Moreover, Cleveland is in a full rebuild, so expect Garland to be given plenty of reps.
More Fantasy News