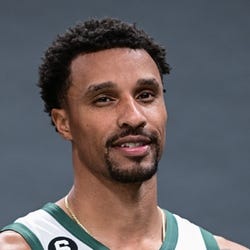 2022 Stats
PTS
5.4
REB
2.0
AST
2.5
STL
0.4
BLK
0.2
ROS Projections
PTS
REB
AST
STL
BLK
Unlock Our Projections
2022 Fantasy Outlook
Hill logged just 54 games during the 2021-22 season, a sign that age is certainly catching up with him. Missed games have been a recurring issue over the past few seasons, limiting his opportunities significantly. The Bucks will again be pressing for an NBA title, meaning the veteran guard will be given plenty of time to rest. Even in 25 minutes per game, Hill has proven unable to fill the box score, meaning even managers in deeper formats would be better served to take a flier on a young player with more upside. Read Past Outlooks
read more
Height 6'4"
Weight 188
DOB 5/4/1986
College IUPUI
Drafted 1st Rd, #26 in 2008
$Signed a two-year, $8 million contract with the Bucks in August of 2021.
Personal Bio/PreCareer Summary

George Jesse Hill Jr. was born in Indianapolis in 1986. Hill spent four years at Broad Ripple High School, where he averaged a state-leading 36.2 points per game as a senior, the fifth-highest single-season mark in Indiana High School Athletic Association history. He was selected to the prestigious Indiana All-Star Team and was named the City Player of the Year by The Indianapolis Star. Hill went on to play at IUPUI, committing to the school because of its proximity to his home and grandfather. He spent four years with the Jaguars, starting 87 times over his collegiate career and seeing his points per game numbers rise from 10.7 to 21.5 from his freshman to senior season. Today, Hill leads the George Hill Rising Stars Program, which endeavors to "use basketball as a vehicle to teach our young boys life skills". He hosts an annual tournament, the G3 Invitational, which brings over 200 teams to the Indianapolis area as a part of his foundation. More information can be found on Hill's website, g3risingstars.org. For his charitable efforts, Hill was awarded the Major Taylor Award in 2015 by the Indiana Black Expo, a non-profit corporation dedicated to the social and economic advancement of African-American youth. You can follow George Hill on Twitter @George_Hill3 and on Instagram @Indianageorge3. Hill spurned offers from power conference schools to stay close to home with IUPUI. He started 21 games as a freshman in 2004-05 and provided 10.7 points and 4.5 rebounds while being voted to the Mid-Continent All-Conference Team. Hill scored 26 points twice during his first year, which led to bigger scoring numbers. As a sophomore, he topped the Jaguars with 18.9 points to go along with 6.0 rebounds, 3.6 assists and 1.7 steals. The guard set a career-high with 32 points and added 15 rebounds in a win over Urbana and was named to the Mid-Con All-Conference First Team. His junior season ended after five games after Hill broke his foot. He returned for his final campaign and the conference was rebranded as the Summit League. Hill ended up winning Summit Player of the Year after averaging 21.5 points, 6.8 rebounds, 4.3 assists and 1.8 steals. He'd go on to declare for the 2008 Draft with one year of remaining eligibility.