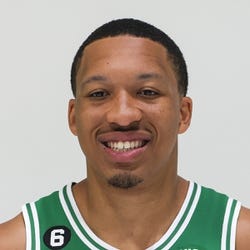 2022 Stats
PTS
8.8
REB
4.6
AST
2.0
STL
0.6
BLK
0.4
ROS Projections
PTS
REB
AST
STL
BLK
Unlock Our Projections
2022 Fantasy Outlook
Williams took a nice step forward last season -- his third in the Association. The Tennessee product started 21 games and played 24.4 minutes per game -- both career highs. Williams earned the additional minutes via improved shooting. His field goal percentage went up from 43.7 to 47.5 percent and his free throw accuracy improved from 58.8 to 90.5 percent. The forward also shot an impressive 41.1 percent from behind the arc as he mastered the corner three. Williams' effective outside shooting makes him an excellent compliment for stars Jayson Tatum and Jaylen Brown. In 2022-23, Williams has an opportunity to further improve his minutes. Veteran big man Al Horford is entering his age-36 season. Boston would love to better rest Horford for the playoffs and reduce the 29.1 minutes per game he played last season. The 23-year-old Williams seems primed to continue his pattern of increased playing time, especially if he can keep up his versatile defensive play and excellent shooting. Read Past Outlooks
read more
Height 6'6"
Weight 236
DOB 11/30/1998
College Tennessee
Drafted 1st Rd, #22 in 2019
$Signed a two-year, $4.88 million contract with the Celtics in July of 2019. Celtics exercised $2.62 million team option for 2021-22 in December of 2020. Celtics exercised $4.31 million team option for 2022-23 in November of 2021.
Personal Bio/PreCareer Summary

Grant Dean Williams was born in 1998 in Houston. He is the son of Gilbert and Teresa Williams. His mother, Teresa, is an electrical engineer for NASA in Houston. Grant attended and played high school basketball at Providence Day School in Charlotte. He was one of only four players ever to be named The Charlotte Observer's Player of the Year in back-to-back years (2015 and 2016). During his senior season (2015-16), Williams averaged 15.8 points, 10.1 rebounds, 4.0 assists, 3.0 blocks and 0.5 steals per game en route to Associated Press All-State honors. He also led Providence Day to the 2016 North Carolina Independent Schools Athletic Association 3A state championship. Shortly after the conclusion of his senior season, he performed a role in Providence Day's production of the musical "Anything Goes". After high school, Williams chose to attend the University of Tennessee over Harvard, Princeton and Yale. Grant has joked that his mom was upset he passed over Harvard and that she didn't talk to him for two months. At Tennessee, the power forward fulfilled all the course work for his academic major, Supply Chain Management, by the end of his junior year. In his first December with Boston, Williams' gifted each Celtic team employee with a custom jarred candle which read "Appreciate All You Do For Us, Let's Have a Great Year." During their rookie season together, new Celtics Grant Williams and Tacko Fall hosted the "Grant & Tacko Show" podcast in a partnership with The Athletic. Fans can follow the thoughtful and polite Williams on Twitter @Grant2Will. In three years (2016-19) at the University of Tennessee, Grant Williams earned his degree in Supply Chain Management and started 101 of 104 basketball games for the Volunteers. After averaging 12.6 points, 5.9 rebounds and 1.9 blocks over 25.4 minutes his freshman season, he was named to the 2016-17 SEC All-Freshman team. As a sophomore, he was named 2018 SEC Player of the Year, led the Vols in scoring (15.2 ppg), and was second in blocks (44) and rebounding (6.0 rpg). He joined Naismith Memorial Basketball Hall of Famer Bernard King as the only Vols ever to earn SEC Play of the Year distinction as underclassmen. After his third and final season, Williams was the first player to win SEC Player of the Year in back-to-back years since 1995. He also joined Bernard King and Dale Ellis as the only Vols to ever be named consensus first-team All-Americans by the NCAA. His 23-of-23 performance from the free-throw line at Vanderbilt (Jan. 23, 2019) stands as the most free throws made without a miss by any player in Division I in the last 60 years and was second all-time.

FBoston Celtics
See All NBA Rumors
Past Fantasy Outlooks
2021
2020
2019
Grant Williams will probably always be a better real-life teammate than a fantasy assert, as his positive locker room presence and ability to switch well on defense unfortunately provides no fantasy benefit. In his second season, he honed his skills as a possible 3-and-D player and shot an improved 37.2 percent from behind the arc. But Williams averaged only 4.7 points and 2.8 rebounds over 18.1 minutes per game last year. The departure of Semi Ojeleye to Milwaukee leaves Williams as Boston's only true power forward reserve behind star Jayson Tatum, but the Celtics might experiment with veteran Al Horford at power forward. Ultimately, Williams will provide more value to the Celtics than your fantasy squad and should be avoided in most formats.
During his rookie season, Grant Williams supplied the all the intangibles the Celtics were hoping for when they picked the 6-foot-7 big man with the 22nd pick in the 2019 Draft. Those intangibles, such as switching on defense, setting tough picks and being a positive influence in the locker room, unfortunately won't help your fantasy team. Heading into 2020-21, expect Williams to see more minutes at center when the Celtics decide to go small. Also expect Williams to improve on his 25.0 percent three-point shooting from last season. Over the last 40 games of the season, the Tennessee product shot 33.3 percent from the behind the arc. Williams will probably see more floor time than the 15.1 minutes per game he received as a rookie. But that playing time boost will probably be modest and most likely won't result in much statistical improvement. Williams is still looking up at Jayson Tatum, Daniel Theis and Tristan Thompson on the Boston depth chart.
Grant Williams, the 22nd pick in the 2019 NBA Draft, has "Glue Guy" written all over him. No one questions Williams' team-first attitude. The concern is his size. At 6-foot-7, can Williams legitimately play power forward in the Association? His 7.5 rebounds per game during his last Vol season certainly look appealing to a Boston squad that's struggled on the boards. With the departure of both Al Horford and Aron Baynes, big-man minutes are certainly available, even with the addition of Enes Kanter. Boston did retain Daniel Theis, but he's had injury issues during both his prior Celtics seasons. Long-term, Boston would love for Williams to evolve into an effective inside presence, guarding bigs and cleaning the glass, while allowing the more dynamic Jayson Tatum or Gordon Hayward to work outside the key. Expecting that to occur during Williams' rookie season is probably asking too much, though. Expect Boston to bring their young Williams bigs (Grant and Robert) along slowly while they learn the subtleties of coach Brad Stevens' system. A slower approach would also grant Williams time to improve his catch-and-shoot three-pointer, something he showed potential with during college, draining 33 percent of his treys his final collegiate season. Playing time will be inconsistent for Williams, but the opportunity to shine does exist.
More Fantasy News