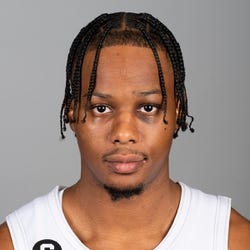 2022 Stats
PTS
4.3
REB
2.2
AST
0.6
STL
0.7
BLK
0.1
ROS Projections
PTS
REB
AST
STL
BLK
Unlock Our Projections
2022 Fantasy Outlook
Despite playing almost 30 minutes per night during the 2021-22 season, Okoro finished well outside the top 200 on a per-game basis with averages of just 8.8 points, 3.0 rebounds, 1.8 assists and 0.8 steals. The Cavaliers view him as a defensive stopper on the wing. He's been good on that end of the floor, partially fueled by his athleticism, but it hasn't translated to gaudy steals and blocks numbers. What's holding Okoro back is his spotty three-point shooting. He improved to 35.0 percent from deep on 2.3 attempts last season, but opponents were actively leaving him wide open to focus on protecting the paint. There's upside if he can truly become a better shooter, but either way, he'll presumably remain a low-usage player in the Cavaliers' offense. Darius Garland, Jarrett Allen, Evan Mobley, Donovan Mitchell and Caris LeVert are all above him on the totem pole. Okoro remains a better option in keeper/dyntasy formats as a bargain-bin flier rather than an option in standard formats. Read Past Outlooks
read more
Height 6'5"
Weight 225
DOB 1/26/2001
College Auburn
Drafted 1st Rd, #5 in 2020
$Signed a two-year, $13.12 million contract with the Cavaliers in November of 2020. Cavaliers exercised $7.04 million team option for 2022-23 in October of 2021. Contract includes $8.92 million team option for 2023-24.
Personal Bio/PreCareer Summary

Okoro was born Jan. 26, 2001 in Atlanta, Georgia to Nigerian parents, Godwin and Gloria Okoro. Isaac was raised close to downtown Atlanta. He has three siblings: Michael, Rachel and Ashley. Okoro began playing basketball in his local church league. While around seven years old, he was trained by AAU coach Omar Cooper. Okoro played high school ball at McEachern High School in Powder Springs, Georgia, and graduated with honors. As a sophomore, he led the team to the regional championship while averaging 22.5 points per game. Later, as a senior, he averaged 19.7 points, 10.6 rebounds, 3.2 assists and 2.7 steals per game and led McEachern to titles at the City of Palms Classic and the Tournament of Champions. The team finished 32-0. Okoro had his jersey retired by the school in 2019. At college, he went to Auburn, where he studied business and was named Second Team All-SEC as a freshman. After his freshman season, he declared himself eligible for the 2020 NBA Draft. Fans can follow the forward on Twitter @isaacokoro303. Okoro needed just one season with Auburn to prove to scouts he was NBA ready despite the fact neither ESPN or Rivals had him ranked in their top-25. The 6-6 wing debuted Nov. 5 against Georgia Southern, scoring 12 points and starting a streak of six consecutive games in double figures. Okoro's collegiate career high came in SEC play, as he put up 23 points in a 83-79 victory over Vanderbilt on Jan. 8. He finished the year with averages of 12.9 points and 4.4 rebounds, but Okoro's defensive contributions were also of major note, as he went on to earn first-team SEC All-Defense honors. He also made the SEC All-Freshman team and second team all-SEC that year. Auburn had been in line for a bid in the NCAA Tournament, but it was canceled due to the coronavirus pandemic and Okoro made clear his intentions to explore the NBA Draft on March 20, later making his decision official May 9.

FCleveland Cavaliers
See All NBA Rumors
Past Fantasy Outlooks
2021
2020
When the Cavaliers drafted Okoro fifth overall in the 2020 NBA Draft, they knew they were drafting a defense-first wing with great athletic ability. Hopefully, he eventually helps with Cleveland's win total, but he will not benefit your fantasy squad. Okoro's rookie stats showed that offense was not his top priority. Over 32.4 minutes per game during his age-20 season, Okoro delivered averages of 9.6 points, 2.1 rebounds, 0.9 three-pointers, 0.8 steals and 0.4 blocks per contest. And in typical rookie fashion, he struggled with his shot, shooting 42.0 percent from the field and 29.0 percent from behind the arc. The poor three-point shooting is particularly disappointing in the modern 3-and-D era, but it is in line with the 28.6 percent he shot in college. That said, Okoro still made the All-Rookie second team, mostly based on his aggressive defense. Of course, at his young age, there is still plenty of room for improvement. And Cleveland's poor bench will not challenge Okoro for minutes, unless the Cavs intend to give Larry Nance major minutes at the three. Ultimately, Okoro will always be a third or fourth option on the offensive end, behind Darius Garland, Collin Sexton and, if healthy, Kevin Love. Look for gradual improvement from Okoro, but probably not enough of an upgrade to have a big fantasy impact.
Okoro will join a Cavaliers squad that went just 19-46 in the 2019-20 season, and he figures to be heavily featured in the team's relatively thin forward rotation, though he'll have to compete with Cedi Osman, Kevin Porter Jr. and Kevin Love for minutes. The 6-foot-6 product out of Auburn averaged 12.9 points, 4.4 rebounds, 2.0 assists, 0.9 blocks and 0.9 steals on 51.4 percent shooting from the floor during his freshman season. Okoro will need to improve on his three-point range after shooting just 29.0 percent from deep across 28 games during his one year at the collegiate level. Still, we can likely expect Okoro to at least see sixth-man minutes as a rookie. If that's the case, he'll likely be worth a flier in deeper leagues.
More Fantasy News