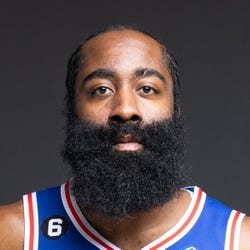 2022 Stats
PTS
21.9
REB
6.7
AST
9.7
STL
1.2
BLK
0.6
ROS Projections
PTS
REB
AST
STL
BLK
Unlock Our Projections
2022 Fantasy Outlook
For the second time in as many seasons, Harden found himself on the move. He wanted out of Brooklyn after having just landed there the prior season. Whether it was his relationship with Kyrie Irving and/or Kevin Durant, or frustration with the front office, things just didn't work out as the Nets had planned when they united the star trio. He was ultimately dealt to the 76ers -- a move that landed Ben Simmons with the Nets. Overall, Harden had a down season offensively by averaging 22.0 points per game -- his lowest mark since the 2011-12 season when he was still with the Thunder. His efficiency also cratered, with him shooting 41.0 percent from the field and 33.0 percent from behind the arc. Still, he wasn't exactly a fantasy dud with his averages of 7.7 rebounds, 10.3 assists, 1.3 steals and 2.3 three-pointers. He signed a two-year extension with the 76ers this summer, taking less money so that they could build up the roster around him and Joel Embiid. If he shows renewed energy and comes into training camp in shape, a very productive season could be on the horizon. Even if he continues to struggle with his efficiency, he does enough across the board to likely make him a mid-to-late first-round pick. Read Past Outlooks
read more
Height 6'5"
Weight 220
DOB 8/26/1989
College Arizona State
Drafted 1st Rd, #3 in 2009
$Signed a one-year, $33 million contract with the 76ers in July of 2022. Contract includes $35.64 million player option for 2023-24.
Personal Bio/PreCareer Summary

James Harden was born in Los Angeles, California, to Monja Willis, whom he credits as the biggest influence in his life. He has three older siblings. Harden attended Artesia High School in Lakewood, California, where he led the team to a 33-2 record and a second consecutive state title as a senior. During that season, he averaged 18.8 points, 7.9 rebounds and 3.9 assists and was named a McDonald's All-American. He also earned second-team Parade All-American honors. Harden won a gold medal as a member of Team USA during the 2012 Olympics in London and FIBA World Championship as a captain of Team USA during the 2014 FIBA World Cup in Spain. Harden founded 3TheHardenWay Inc. (https://www.3thehardenway.com/community), which "was established to provide higher learning opportunities for future leaders of our nation." The organization's mission is to bridge the "economic and educational gaps in the Houston Metropolitan Area by providing academic financial support to high achieving students demonstrating leadership within communities facing economic hardship." Harden also donated $1 million to aid Hurricane Harvey relief efforts after areas of Houston were devastated by flooding. In July of 2019, he became a part owner of Houston's professional soccer teams -- the Houston Dynamo of MLS and the Houston Dash of NWSL. Learn more about Harden by following him on Twitter (@JHarden13) and on Instagram (@jharden13). Harden attended Arizona State for two seasons under the tutelage of coach Herb Sendek. The 6-foot-5 guard quickly took control of the Sun Devils' offense and led the team in scoring as a freshman with 17.8 points per game. He added 5.3 rebounds, 3.2 assists and 2.1 steals. He was named to the All-Pac-10 First Team and the All-Freshman Team. Expectations were higher for his sophomore season, and Harden delivered. He put up 20.1 points, 5.6 rebounds and 4.2 assists to win the Pac-10 Player of the Year award. The guard scored a career-high 40 points in a win over UTEP. The Sun Devils made it to the Big Dance, but Harden struggled in two games. He was just 3-for-18 from the field on his way to a combined 19 points. Following the 2008-09 season, Harden declared for the NBA Draft with two seasons of college eligibility remaining. He was chosen by the Oklahoma City Thunder with the third overall pick.