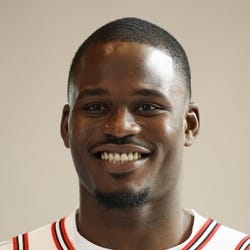 2022 Stats
PTS
5.7
REB
3.0
AST
0.8
STL
1.0
BLK
0.7
ROS Projections
PTS
REB
AST
STL
BLK
Unlock Our Projections
2022 Fantasy Outlook
Coming off a surprisingly strong rookie season, Green looks set for a regression given the Bulls' roster construction and seemingly healthy player pool. Thanks to injuries, Green carved out a consistent role for himself during 2021-22, logging almost 24 minutes per night. He averaged 7.2 points, 4.2 rebounds and 1.0 steals, shooting 54 percent from the floor and 83 percent from the line. While a season such as that could usually result in an increased role, the addition of Goran Dragic needs to be factored in, as does the health of both Lonzo Ball and Alex Caruso. All three players are likely to be ahead of Green in the rotation, so while he has a proven track record, the sophomore could very well find himself struggling to play more than 15 minutes per night. As of where things stand, he is not a name worth considering across the bulk of fantasy leagues. Read Past Outlooks
read more
Height 6'5"
Weight 205
DOB 7/23/1993
College Radford
Debut 2019
$Signed a two-year, $3.48 million contract with the Bulls in August of 2021.
Personal Bio/PreCareer Summary

Javonte Green was born in Peterson, Virginia. Green's nickname is "Woo," based on noises he made as a baby. He moved to Alberta, Virginia, when he was 12. Green attended Brunswick High School in nearby Lawrenceville and starred for the Bulldogs basketball and football squads. He played quarterback for the football team. During his senior season on the hoops team, Green averaged 18.6 points, 5.8 boards, 2.3 assists and 3.1 steals per contest and led the Brunswick to the VHSL Group AA Division 3 state title. After graduation, Green was offered a basketball scholarship from Radford University and a football scholarship from James Madison University. He choose to attend Radford. Green is a dual citizen of both the U.S. and Montenegro. Follow Green on Instagram @Savagewoo2 and at Twitter @2xtremebounce. Javonte Green played for four seasons with Radford of the Big South. He was a starter in 122 of the 133 games in which he appeared for the Highlanders. By his sophomore season (2012-13), Green demonstrated all-around skills by posting 14.6 points, 8.1 rebounds, 2.1 steals and 0.7 blocks across 27.7 minutes per game. During both his junior and senior seasons, he led the Big South in steals and was top three in rebounds. He then played three seasons overseas, first with CB Mari­n Peixegalego of the Spanish third division, LEB Plata. That led to two seasons with Pallacanestro Trieste of the Italian second division, Serie A2 Basket. In the summer of 2018, the forward signed with Ratiopharm Ulm of the Basketball Bundesliga, where Green would average 13.9 points, 4.5 rebounds and 1.7 assists per game. He officially made the Boston Celtics roster, receiving his first NBA-level contract in October 2019.