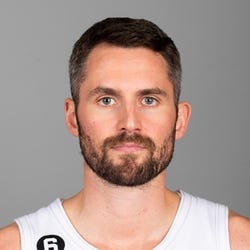 GTD
Injury Thumb
Est. Return 12/2/2022
2022 Stats
PTS
10.6
REB
7.2
AST
2.5
STL
0.1
BLK
0.2
ROS Projections
PTS
REB
AST
STL
BLK
Unlock Our Projections
2022 Fantasy Outlook
For the first time since his sophomore year in the NBA, Love appeared off the bench more than he started in 2021-22. The Cavaliers drafted Evan Mobley in the 2021 Draft, pushing Love to a reserve role, while Mobley and Jarrett Allen started in the frontcourt, and Lauri Markkanen got the nod at small forward. However, it was still a successful year for Love, who placed second in Sixth Man of the Year voting behind the Heat's Tyler Herro. Love tallied 22.5 minutes per game and averaged 13.6 points on 43/39/84 shooting, 7.2 rebounds and 2.2 assists. Notably, he played 74 games -- his first time appearing in more than 60 since 2015-16. Love also ranked 127th in per-game fantasy production, making him viable as a bench piece in standard leagues. Not much should change for the 34-year-old this season, though he remains an injury risk -- something that will only increase with age. Also, considering his severely reduced role and best-case scenario outcome last season, it makes sense for Love to go undrafted in many standard formats. There are plenty of players with higher upside. Even managers in deep leagues have reason to pause with late picks. Read Past Outlooks
read more
Height 6'8"
Weight 251
DOB 9/7/1988
College UCLA
Drafted 1st Rd, #5 in 2008
$Signed a four-year, $120.4 million contract extension with the Cavaliers in July of 2018.
Personal Bio/PreCareer Summary

Kevin Wesley Love was born in 1988 in Santa Monica, California to Stan and Karen Love. His father played pro ball for the Bullets, Lakers, and Spurs over four seasons. Love grew up in Oregon and went to Lake Oswego High School, where he averaged an unbelievable 26.8 points and 14.5 rebounds and was named Oregon Player of the Year three times as a four-year starter. During his senior campaign, he posted 33.9 points, 17.0 rebounds, 4.0 assists, and 4.2 blocks per game as the team made it all the way to the state final. Love received many awards in 2007, including the Naismith Prep Player of the Year, the Gatorade National Male Athlete of the Year, and USA Today High School Basketball Player of the Year. He has also represented Team USA and won gold at both the 2010 FIBA World Championship and the 2012 Summer Olympics in London. In 2018, he founded the Kevin Love Fund to promote healthy living and provide resources to achieve physical and emotional well-being. You can follow him on Twitter and Instagram (@kevinlove). The mid-2000s were heady days for UCLA. The team hosted a string of future NBA players and made back-to-back Finals Fours in 2007 and 2008. The 2007-08 season was headlined by the recruitment of Love. The Oregon native made his way south after being named Gatorade National Male Athlete of the Year and a First-Team Parade All-American. The 6-foot-10 forward provided 17.5 points, 10.6 rebounds and 1.4 blocks and helped the Bruins win the regular-season Pac-12 title, the Pac-12 Tournament championship and a No. 1 seed in the NCAA Tournament. UCLA held its seed by winning four games before falling to Derrick Rose and Memphis in the Final Four. In the tournament, Love averaged 19.8 points and 10.6 rebounds and had three double-doubles, including 29 points and 14 rebounds in a Sweet 16 win over Western Kentucky. After one season in Los Angeles, Love made himself available for the 2008 NBA Draft. He was taken fifth overall by the Memphis Grizzlies, and was traded to the Minnesota Timberwolves on draft night for the third overall selection, O. J. Mayo, in an eight-player deal.