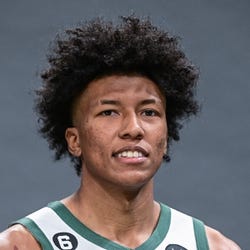 Out
Injury Illness
Est. Return 12/3/2022
2022 Stats
PTS
5.3
REB
2.9
AST
0.4
STL
0.5
BLK
0.1
ROS Projections
PTS
REB
AST
STL
BLK
Unlock Our Projections
2022 Fantasy Outlook
After spending last season with the G League Ignite, Beauchamp was selected with the No. 24 overall pick in the 2022 Draft by the Bucks. With the Ignite, the 6-foot-6, 197-pound wing averaged 15.1 points on 51/27/72 shooting, 6.5 rebounds, 2.0 assists and 1.5 steals in 34.6 minutes. Despite a complicated path to the NBA - four different high schools and a community college stint before the G League - and a shaky jumper, Milwaukee targeted Beauchamp for his defense, athleticism and feel for the game. His size, which includes a 7-foot-1 wingspan, will allow him to switch at the NBA level, though a little more bulk would help against frontcourt opponents. Offensively, he's played enough guard to have a secure handle, and he knows how to make intelligent cuts off the ball. Beauchamp is also a great transition player, which will help while playing alongside Giannis Antetokounmpo. Beauchamp may need to spend more time in the G League again this season, as Milwaukee is focused on a title run and needs to give minutes to win-now players. Specifically, he'll be fighting against Pat Connaughton, Wesley Matthews and Thanasis Antetokounmpo for backup run. Injuries and rest days for veterans will presumably open up time here and there for the rookie, but it'll be surprising if he's an every-game player. Read Past Outlooks
read more
Height 6'7"
Weight 197
DOB 10/12/2000
College Yakima Valley College
Drafted 1st Rd, #24 in 2022
$Signed a two-year, $5.09 million contract with the Bucks in July of 2022. Contract includes $2.73 million team option for 2024-25.
Personal Bio/PreCareer Summary

Entering high school, Beauchamp moved to Seattle to play basketball at Nathan Hale High School under head coach and former NBA All-Star Brandon Roy to face stronger competition. As a freshman, he spent most of his time on the bench on a team that featured Michael Porter Jr. and Jontay Porter. As a sophomore, Beauchamp transferred to Garfield High School in Seattle where he was given the opportunity to play a bigger role. He won his second straight Class 4A state championship and helped Garfield reach the quarterfinals at the High School Nationals. He ended up transferring again to Rainier Beach High School in Seattle. After leading Rainier Beach to league and district titles, he was named the MVP of the Seattle 3A Metro League. Beauchamp guided his team to a Class 3A state semifinal appearance and fifth place in the state tournament. He averaged 26 points, 11 rebounds, and five assists per game and was named to the USA Today All-USA Washington second team and Associated Press Class 3A All-State first team. He transferred to Dream City Christian School, a school in Glendale, Arizona where he finished his high school career. After the season, he went back to his hometown of Yakima to graduate from Eisenhower High School. He declined various college offers and decided to join a training program in San Francisco to get ready for the 2021 draft. However, the COVID-19 pandemic hit, which meant that gyms around the country had to be closed. Beauchamp was forced to return home. He would end up joining Yakima Valley College, a local junior college, where he thrived, averaging 30.7 points, 10.5 rebounds and 4.8 assists per game through 12 games. Once again, he passed on the opportunity to play Division 1 ball and headed to the G League Ignite program. He was a solid contributor, averaging 15.1 points, 7.3 rebounds, and 2.1 assists per game. On June 23, his dreams finally came true as he was selected with the 24th pick in the 2022 NBA Draft by the Milwaukee Bucks.