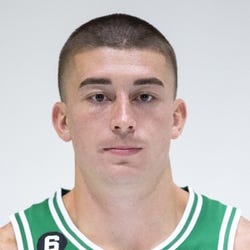 2022 Stats
PTS
5.3
REB
1.5
AST
1.2
STL
0.4
BLK
0.1
ROS Projections
PTS
REB
AST
STL
BLK
Unlock Our Projections
2022 Fantasy Outlook
Pritchard took a small step backward in his second season with the Celtics. New coach Ime Udoka preferred a short rotation, which resulted in Pritchard's minutes per game dipping from 19.2 during his rookie season to 14.1 last season. The trade deadline acquisition of Derrick White from San Antonio also hurt Pritchard's minutes. But despite the shrinking playing time, Pritchard was still a sharpshooter from deep. He once again shot better than 41 percent from behind the arc -- good for 13th in the Association. Unfortunately, Pritchard's counting stats will never look attractive due to limited floor time. This summer, Boston added yet another impediment to Pritchard's playing time. The Celtics added veteran Malcolm Brogdon, who will see lots of minutes at both guard positions. So Pritchard now sits behind Marcus Smart, Jaylen Brown, White and Brogdon on Boston's depth chart. For 2022-23, look for more high-percentage outside shooting from Pritchard, but little else as the third-year guard fights for playing time. Read Past Outlooks
read more
Height 6'1"
Weight 195
DOB 1/28/1998
College Oregon
Drafted 1st Rd, #26 in 2020
$Signed a two-year, $4.17 million contract with the Celtics in November of 2020. Celtics exercised $2.24 million team option for 2022-23 in November of 2021. Contract includes $4.04 million team option for 2023-24.
Personal Bio/PreCareer Summary

Payton Michael Pritchard was born January 28, 1998 in Tualatin, Oregon. He is the son of Melissa and Terry Pritchard. Pritchard attended West Linn High School, where he won four consecutive state titles and was named the 2015 Gatorade Oregon Player of the Year. He also finished high school with a 3.61 GPA. Pritchard chose the University of Oregon for his college studies. Through four years as an Oregon Duck, the point guard started 140 of 144 games, including every game of his sophomore, junior and senior seasons. Pritchard was the first player in Pac-12 history to register 1,900 career points, 500 career rebounds and 600 career assists. The pesky point guard majored in general social science and graduated in 2020. Fans can follow the Oregon product on Twitter @fastpp3. After a decorated high school career, Pritchard decided to stay in state and attend the University of Oregon from 2016 to 2020. As a freshman, the Oregon Duck started 35 of 39 games and posted 7.4 points, 3.6 assists and 1.3 made three-pointers per game. He and Dillon Brooks also led the Ducks to the NCAA Tournament Final Four. During his sophomore season, Pritchard's production increased to 14.5 points, 4.8 assists, 3.8 rebounds and 2.4 three-pointers per contest. Those stats resulted in the West Linn product making the All-Pac-12 Second Team. As a junior, Pritchard's 4.6 assists per game helped guide the Ducks to a 25-13 record and the NCAA Tournament Sweet 16. In Pritchard's senior season (2019-20), he delivered 20.5 points, 5.5 dimes and 2.8 made-three pointers per game, all college career-best marks. He led the Ducks to a 24-7 record before the season ended prematurely due to COVID-19. The senior was then named Bob Cousy Point Guard of the Year and Pac-12 Player of the Year. Thirteen organizations listed Pritchard as a First Team All-American in 2020.

GBoston Celtics
See All NBA Rumors
Past Fantasy Outlooks
2021
2020
After being selected with the 26th pick in the 2020 NBA Draft, many were surprised with Pritchard's production during his rookie season. Among all rookies, the guard finished seventh in total three-pointers, 13th in points and 14th in both assists and minutes played. His strong play enabled Boston to part ways with Jeff Teague mid-season. In the off-season, Boston dealt Kemba Walker to the Thunder but then added Dennis Schroder on a one-year deal. Heading into training camp, the Celtics' backcourt roles are undefined. Will Schroder start at PG as he did for the Lakers or come off the bench in an instant offense role as he did for OKC in 2019-20? Will Marcus Smart start as the shooting guard, as he often did last year, or will he be the starting point guard? Regardless, the late addition of Schroder closes what looked like a big opportunity for Pritchard after the Walker trade. With that said, Pritchard's stats reflect more of a shooting guard's output, despite his point guard designation. Last year, Pritchard dished 1.8 assists and drained 1.5 threes per game while shooting 41.1 percent from behind the arc. Coming off of a strong showing in Summer League, look for Pritchard to attempt to improve upon last season's 19.2 minutes per game.
Pritchard enters a situation in Boston where he is staring up at two veteran point guards on the Boston Celtic depth chart. The rookie (26th pick) certainly will not eat into star Kemba Walker's playing time. So that leaves newly signed 32-year-old veteran Jeff Teague as Pritchard's main competition for playing time. More likely, the addition of Teague gives Pritchard some time to learn to ropes. We also probably shouldn't brush aside 2019 second-round pick Carsen Edwards, though Edwards missed his golden opportunity last season to provide some scoring punch of the bench. Pritchard shot 41.5 percent from behind the arc during his senior season at Oregon. That accuracy, as well as his 20.5 points per game, clearly caught general manager Danny Ainge's attention. As in 2019-20, Boston is looking at a reserve squad that lacks a quick points-off-the-bench option. If Pritchard can get hot early, he may earn some meaningful minutes. If not, which is more likely, he'll probably learn his trade via some quality time with the G League Maine Red Claws.
More Fantasy News