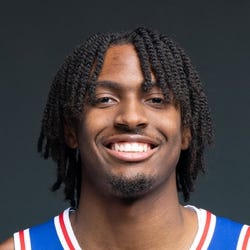 Out
Injury Foot
Est. Return 12/11/2022
2022 Stats
PTS
22.9
REB
3.5
AST
4.4
STL
1.0
BLK
0.3
ROS Projections
PTS
REB
AST
STL
BLK
Unlock Our Projections
2022 Fantasy Outlook
Maxey was one of the most notable breakout players of the 2021-22 season. Ben Simmons' absence before the trade deadline allowed Maxey to step in as the starting point guard, and his role remained stagnant after the Sixers dealt Simmons for James Harden. The 21st overall pick in the 2020 NBA Draft, Maxey averaged 17.5 points, 4.3 assists and 3.2 rebounds in 35.3 minutes in his second NBA campaign. His shooting efficiency was excellent, especially considering the considerable increase in role and his age (just 21), with the point guard slashing 49/43/87. Impressively, Maxey also minimized his turnovers (1.2), making him a sneaky target in nine-category fantasy leagues. Maxey also played at a high level into the playoffs during the 76ers' series against the Raptors and Heat. Over 12 postseason games, the Kentucky product averaged 20.8 points on 48/38/94 shooting, 3.9 assists, 3.5 rebounds and just 1.8 turnovers in 40.4 minutes per game. Maxey's role will likely remain the same for this upcoming season, though fantasy managers can expect some improvement given his age. Ultimately, Maxey's usage will be capped given the presence of Harden and Joel Embiid. Still, he has already established himself as the Sixers' No. 3 option and someone capable of running a bench unit. Read Past Outlooks
read more
Height 6'2"
Weight 200
DOB 11/4/2000
College Kentucky
Drafted 1st Rd, #21 in 2020
$Signed a two-year, $5.08 million contract with the 76ers in December of 2020. 76ers exercised $2.73 million team option for 2022-23 in October of 2021. 76ers exercised $4.34 million team option for 2023-24 in October of 2022.
Personal Bio/PreCareer Summary

Maxey was born Nov. 4, 2000 in Dallas, Texas. He is the son of Denyse and Tyrone Maxey. His father, Tyrone, played basketball at Washington State and is the Director of Recruiting for SMU's basketball team. Tyrese has three sisters: Denasia, Talia and Keiara. Maxey has seen every Marvel movie since 2008. Maxey played his high school ball at South Garland High School in Garland, Texas, where he graduated in the top 5% of his class. He was named to the 2018 USA Today All-Texas First Team and was a McDonald's All-American selection. After high school, he was tabbed as the No. 10 overall prospect by the Recruiting Services Consensus Index. For college, he chose Kentucky over Texas, Michigan, Michigan State and Oklahoma State. During his one year at Kentucky, Maxey performed exploratory studies in agriculture before opting to leave college to pursue an NBA career. Fans can follow the guard via @TyreseMaxey on both Twitter and Instagram. A consensus five-star recruit coming out of high school, Maxey was able to live up to expectations in his first and only season with Kentucky. He made his collegiate debut in a high-profile game Nov. 5 against Michigan State, scoring 26 points off the bench in a seven-point victory. Maxey moved into the starting lineup three games later and never looked back. His season-high of 27 points came in an OT victory Dec. 28 against Louisville, and he posted a season-best eight assists just a few games later against Georgia. When it was all said and done, Maxey finished third on the team in scoring (14.0 PPG) and second in three-pointers made (33). He made the SEC All-Freshman team and was second-team All-SEC before officially declaring for the draft shortly after the season's conclusion.

GPhiladelphia 76ers
See All NBA Rumors
2021 Fantasy Outlook
In his rookie season, Maxey was able to play very efficiently despite not having a set role with the Sixers. Of his 61 appearances, he played 20-plus minutes in 23 of them, but also played fewer than 10 minutes in 23 games. However, when the Kentucky product was given opportunities, he certainly showed promise, as he scored his career-high 39 points in just the tenth game of his career. In the entirety of the season, Maxey averaged 8.0 points, 2.0 assists and 1.7 rebounds while shooting a solid 46.2 percent from the field. Now, with Ben Simmons wanting out of Philadelphia, Maxey could be destined for a much larger role with the team in the 2021-22 campaign. If the 20-year-old can see enough minutes, he could gain relevance in deeper formats.
More Fantasy News